With the innocence of a kid and the nonchalance of a thirteen year old, Corina Mica first sat down in front of her television to see and understand the Revolution that was going to change her country in short time. The awareness of the adult she would soon turn into was what helped her understand that some things were different from the previous night. The country where she was born and currently living was about to start a transitional period that would lead to the democracy and freedom many people desired. And so they proved the night the Revolution started.

It was four days before Christmas, 1989. Romania had been living under the Communist dictatorship of Nicolae Ceaucescu for twenty four years, and some voices were being raised in small circles of intellectuals and nonconformists some time before everything began. The city of Timisoara, in west Romania, is the place where the revolution first started, on 16th of December, but it was the 22nd when it all finished in the capital city. Only a week had been enough to finally tear down the yoke of the Communist, or at least, to start glimpsing the air of change and freshness a new political direction could bring to the country. 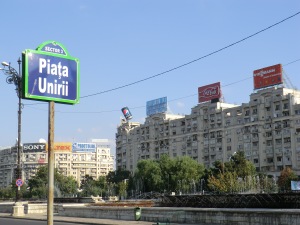 “In fifteen minutes, we will be back with an important message to the country”, was the sentence Corina could hear over and over again from the radio. The TV was her only companion during those days when her dad was at work, her mum was out of town and she was forced to stay home with her broken elbow cast, and she soon understood the difference between the normal 2 hour-a-day programming and this sudden non-stop source of information that displayed agitated images and people shouting their freedom in a violent atmosphere. Something was happening, and although she could not understand exactly what was going on, she could still feel that Bucharest, her hometown and swarm of protest, was shaking.

The night of the 22nd of December might have been a long one for those Romanians who stared at the television screen with the anxiety and the wonder of what was about to happen the morning after. So did Corina with her dad. He had just come back from his job at Otopeni, the same place where there was a bombing the day after in two buses. One of these buses was a civil one, and her dad had to watch one of his colleagues die in his arms without having enough time to thank him for covering his body with his own the instant the explosion hit. It was a dangerous moment what people in the last days of the 80’s decade had to live in Romania, but it seemed necessary for them to struggle for change.

“Everything I knew changed… it was changing before my eyes. I was a Pioneer –something similar to Boys Scouts Association-, a very proud one who felt good being part of the system. And suddenly everything I knew and was normal for me changed”, she says. For a kid, being removed from the institution that allowed her work for the country and prove herself an important piece of the national puzzle, the changes this revolution were bringing from the screen of her television were nothing but a burden. But there he was, her dad, reassuring her and explaining everything that needed to be explained: “Information was coming all over the place, and it was not very clear… They said things like “don’t drink water, don’t go there”… Also naked shot people being thrown to the crematory were displayed on TV. Very shocking images in 24 hours”, she recalls.

Of course that some of those things needed some explanations to be assimilated by the young Corina, but all in all, she considers herself lucky to have seen everything, because it gives her the opportunity to remember a very important part of the history of her country. Fortunately, she was young enough to watch them without the poison of the prejudices and, at the same time, old enough to realize some things and remember them. And so she expresses when she answers the question “What do you think about it now?”: “I was lucky because I was lucky to see it. I don’t want to go into meaning of what happened; all I will say is that it was a needed change, with extremely high cost in human lives”.

A week after that 22nd of December, after Ceaucescu had been executed the night of the 25th of December in some very longed and expected exposed images, things were back to calm. Finally, Corina could go out to remove the plaster from her injured arm. She could observe the new outlook in her city with the perspective time offers: there were no longer people shooting and the Communist leaders was no longer alive, but she could notice people trying to bring things back to normal, to move around and render a life to a country that could consider itself a little “reborn”. This way, Corina recalls how she could sense a different feeling: “People were not scared anymore to gather or speak loud… There was an effervescent atmosphere”.

This atmosphere Corina felt at the moment, more that twenty years ago, was the catalyst that made Romanians fight for their country and revive it from the ashes, ashes as gray as the buildings they can see every day in the city, as a legacy of the Communist period.